“Hello, this is the Concrete Cow Brewery how can I help you?" 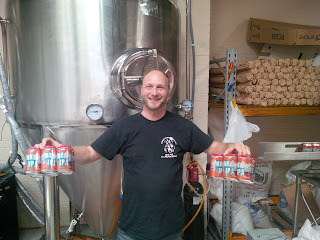 Despite the clue being in the name, the Concrete Cow Brewery regularly gets calls asking if they can supply building materials. “No”, they explain politely, “but we can sell you some delicious real ale or craft beer. It’s very reasonable and made right here in Milton Keynes.”  After being re-educated in using the yellow pages, on this occasion the caller is left not with several tonnes of concrete, but instead, with details of a local shop selling MK IPA, Concrete Cow’s newest brew-up. They also put the phone down confident in the knowledge that supporting a local micro brewery, rather than buying concrete, is clearly the best use of their time and money. “Sometimes,” Dan explains to me, “they do actually buy some beer. So I can’t get too annoyed about it.”

Dan is the owner, receptionist, Master Brewer, delivery driver, warehouse manager, sales manager and PR hurricane that makes up the Concrete Cow Brewery and he very graciously gave me a few hours of his time to ask him odd questions and generally make a nuisance of myself in and around the actual work that he had to do.

After inviting myself along, I found the Concrete Cow Brewery on an industrial estate just round the corner from Bradwell Abbey in MK. The unassuming door hides a unit containing a mixture of crates, boxes, tubs, barrels, kegs, crates and all kinds of shiny machinery that seem very complicated and very expensive. We started our conversation talking about all the processes, as well as the various definitions of beer making and providing a context between real ale (a live beer with yeast, no artificial carbonation and must be pulled through on the pump), a craft beer (can be carbonated and cooled) and a lager (commercial vs the real deal as they are completely different beasts). All of which was seemed amazingly detailed and subtle in application of the definition. Dan found his way through explanations of storage requirements, filtering and levels of carbonation that were both fascinating and bewildering in equal measure but it was when we got onto the subject of the man himself that I really saw who the Concrete Cow Brewery really was. 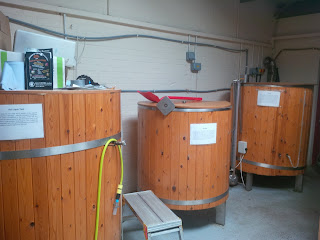 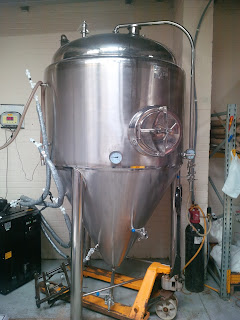 Eighteen months after that he wanted to shut everything off, sell up and go back to the day job. “You just don’t appreciate the situation when you first sign the invoice, everything went wrong. It was just so difficult, no orders, no money, nothing. I tell all the new boys who come to see me now that they have got to understand what they’re getting themselves into” Dan explains with brutal honesty. You see, being around for eight years means that Dan is now teaching other micro-breweries the tricks, an irony which is not lost on him; “They ask me as if I know what I’m talking about. I keep recipes but sometimes I’ve got no idea what I’m going to do before I do it. They ring me up and ask if they can come over and do a brew with me. I usually say ’OK, so long as you bring a packet of Hobnobs.”

Dan started out trying to rally against the commercial Tsunami of underwhelming and generally tasteless lagers and beers that threaten to submerge you in marketing terms such as ‘cold filtered’ and ‘fresh’, he even has a few choice words to say about the ale drinkers friend; ‘bottle conditioned’ beer. “Bottle conditioned?” he exclaims, “It’s filtered then re-seeded with yeast and sugar, it’s not very authentic, but it is consistent.” And that is where The Concrete Brewery has found it’s place. Genuine effort, bloody mindedness and not a little amount of swearing goes into making sure every drop that comes out of the tank is authentic. Dan knows his product is clean because he can tell you (and show you) exactly what went into (and came out off) every single batch, it’s pure because it’s not filtered.

So now that I’ve spouted off about his mission statement, what is Dan’s beer actually like? Although regular readers will know that I am quite the butterfly when it comes to alcoholic preferences, as I flit, full of poise and grace from beer, to wine to Jagermeister and back again*. We tried his IPA that is proudly being canned on his very new, and very shiny, canning machine. 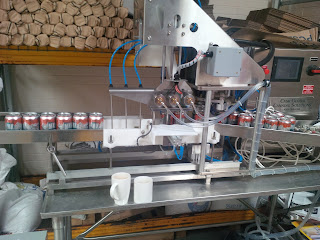 The beer is light and golden, slightly carbonated and best served cold. At 5% it’s punchy and the hops coming through certainly give the ale drinkers among us something to chew on. The aftertaste continues with a pleasant bitterness that smooths off as quickly as it comes, it’s relaxing, refreshing and pretty much perfect for an afternoon in the sunshine. The head is frothy and aromatic with floral whiffs of a great English country garden, plus, at £10 for a six pack it’s as cheap as any supermarket beer you care to mention. “Value is really important” says Dan, “you can’t compete unless your product is giving value.” To be honest, forgetting the fact that it’s local, the fact that it’s genuinely authentic and the fact that Dan works his knackers off to make it, £1.66 for a beer that tastes like this is not just good value, it’s bloody amazing.

Industry figures tell us that ale is on the rise and organisations like CAMRA are spearheading it’s popularity, but aren't we just replacing one mass produced opinion with another? You will only get product at the supply levels required for the supermarkets if there is a homogenised and clinical manufacturing process. And that’s fine, we can all drink whatever we like. Sometimes I like a cold, fizzy light lager. Sometimes I like a dark, rich pint with a head so thick that I can rest a pork scratching on it and sometimes I want something in-between. But above all, I want to know what I'm drinking and the only way to know that is to find out where, how and who produces it. What I see in the Concrete Cow Brewery is a man on a never-ending mission to produce something that reflects who he is in a glass; sometimes light, sometimes dark but always easy to drink. There is room for lager, ale, craft but regardless of what you drink, you can’t ask for more than a product created in small batches and carefully produced with the sole principle of being what a beer could and should be.


*Or at least that’s the way I like to see myself. Mrs P says that ‘flitting’ isn’t quite right and has suggested words such as ‘lurching’, ‘stumbling’ then ‘crawling’ and finally simply ‘dribbling’.
Posted by Unknown at 03:20